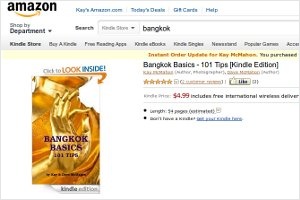 Sorry I’ve not been posting for a while. First, I was on holiday and then I got distracted by various other things – not least trying to write and publish a Kindle book within a week. It was a bit of a slog and I didn’t help myself by not doing any prior research or planning.

Why would I do such a crazy thing? Well, Ryan Deiss (a ‘name’ in Internet Marketing) launched the seven-day Great Kindle Challenge, to show how easy it is to write and sell Kindle books. Sceptical though I was, I decided to follow his progress to see if it really would be possible. I didn’t want to waste any time in getting started, in the (forlorn) hope of being able to succeed by doing as he did, so I jumped straight in. It soon became apparent that the punters, like me, weren’t going to learn anything from the Ryan Deiss Great Kindle Swindle, because he kept all his ‘secrets’ to himself and if you wanted to learn them, then you had to pay $297 for his latest MMO course.

Several other problems arose throughout this sham of a challenge. It turned out that there were several prerequisites needed such as having a book already written and ready to go, plus some kind of promotional plan, and an undisclosed budget for promoting the book.

Read about the challenge

If you’re interested in reading a day-by-day account of me going through the challenge, there’s a long thread (currently running to 11 pages) on the Experienced People Forum. It’s well worth a read. Apart from the comments and criticisms of Deiss’s challenge, lots of members joined in with advice and helpful links, as is always the case on the EP forum.

Anyway, that’s the background of how I ended up publishing a book on Kindle without doing any prior research, even though it seemed obvious to me from the very beginning that it couldn’t really be as easy as Deiss was making it out to be in his pre-sell so-called challenge. Despite the let-down of the challenge, I did enjoy the process of writing and publishing the book and decided to have another go.

Doing it differently this time

I would have thought that the place to start before even beginning to write a book would be to do some market research to select a niche and keywords. Remember that Amazon is a search engine of buyers so, just as SEO (whether black or white hat) is an attempt to gain higher rankings in the search engines, then if you want higher rankings in Amazon you’ll need to use many of the same tactics. However, I wondered if niche selection and keyword research would be the same as one does for Google et al – or would there be some quirks or differences for Amazon, and for Kindle books in particular? This is what I’m going to explore later in this article.

I have never attempted to rank in Amazon before, although I’ve had some previous success in Google, so I’m not going to be teaching you anything here. Some of you reading this probably know a darned sight more about this than I do, but I’m going to try to achieve some success by publishing Kindle books and you can join in if you like and even try it along with me. This is not a fast-paced pre-sell for anything. It’s more of a case study and I hope we can learn from each other.

By the way, the Kindle book I published is called Bangkok Basics – 101 Tips. We can use Bangkok as an example throughout this article, since I’ve already published a Kindle book about that. I could get horribly embarrassed here doing this research retrospectively. In which case I’ll have learned by my mistakes for next time. On the other hand, maybe I’ll get away with flying by the seat of my pants (again). In any case, I’m hoping to bring out a new and improved version of the book in early next year, so with any luck I’ll be properly geared up to doing things properly next time. 🙂