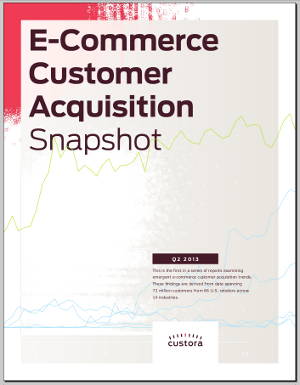 According to an article by entrepreneur.com earlier this month, companies’ use of social media is failing to create customers.

The article starts off with a graph from Custora which shows what a small percent of customer acquisition is attributable to social media. But the graph only gives you part of the story. When you add together the figures for social media, email, and organic search, they only amount to 24%. What happened to the other 76%? Paid search and advertising presumably, but there’s no mention of what it is. In which case, organic search is not as important as a quick glance at the graph might have you believe. “Ooh. Look how important organic search is. It’s way above everything else on the graph. Let’s do some SEO!” Perhaps you’re not supposed to notice or ask about the missing 76%.

By this time I was feeling a bit of déjà vu. I’m sure we’ve been through all this before. Aha! Here we are. In July last year, Entrepreneur posted an article with helpful advice from a dozen experts about using social media without feeling overwhelmed by it. I commented on that article in the context of a discussion of customer acquisition:

It just so happened that Custora had published a statistics-based paper about social media and customer acquisition at roughly the same time, so I drew that into the discussion too. It looks as if Entrepreneur have used exactly those stats as the basis for their article this month, suggesting that the social networks aren’t the best place to create customers. A bit slow off the mark – no-one could exactly accuse them of jumping to hasty conclusions, could they? Anyway, let’s see what they’ve got to say this time.

The gist of their argument is that the social sites aren’t good for creating new customers because many business are using them the wrong way.

Don’t sell to people on the social media…

As Entrepreneur see it, the problem is the “Buy now” mentality. Marketers often use social media as a sales tool as though it was an extension of their brand. They create content designed to promote sales, but people generally aren’t on social media sites to buy. And most likely they’re not in a buying mood. Unsurprisingly this doesn’t work so either they keep trying harder to do more in the hope that it will eventually work, or they conclude that social media isn’t useful for their business. Instead, they should realise that it’s their “Buy now” approach which is wrong, and take action to change it.

…just chat to them

The solution is the “outreach” mentality. This approach focuses on engaging with the public, generating leads through conversation and only turning those leads into customers on the business’s own B&M or virtual premises – away from the social media. Don’t try to sell anything through the social media, just reach out to them and share something, eg an insider’s look at a part of the business. It also helps if you “target the right demographic on the right platform”. In other words, get your message out in the right places.

It’s old advice, but are you still ignoring it?

Fair enough, but this is very old advice from Entrepreneur. Don’t use social media as a sales tool because people aren’t there to buy.

It’s common sense. You don’t go down the pub to do your shopping (unless your shopping consists of buying from people toting sports bags full of dodgy stuff). You go to socialise. And if someone comes up to try and sell you something, you block them out and carry on with your conversation.

Even so, I wonder how many of us are still tweeting and posting on Facebook with “Buy my latest product” messages. I know I’ve been guilty of that. Now I’ll have to think of something more engaging.

How have you been using social media to engage more with your customers without trying to use it as a sales tool? Have you had any success? Please share your experiences by commenting below.