Who is Gumroad for? 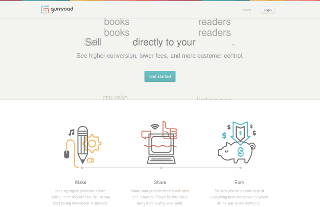 In my earlier blog posting, I wrote about how artists can use Gumroad to make money online. But it’s not just useful for artists, it can be used by all sorts of people to sell all sorts of things.

Gumroad is for independent writers, designers, game developers, musicians, artists, filmmakers, and anyone in-between. Simply, if you’re a creator — Gumroad is for you.

A very impressive list of clients have chosen Gumroad to sell their products, including such luminaries as Bon Jovi, Eminem and Guy Kawasaki.

Gumroad is available to vendors in over 40 countries to sell their products online. It supports feeless PayPal transfers to vendors in 28 countries; vendors in the US and Japan can also receive direct bank deposits.

Although the emphasis is on digital products, you can also sell physical ones alongside. In fact, the physical product may be the one you’re really selling – the digital one may be nothing more substantial than a PDF saying “Thanks for buying our widget – we’re shipping it to you now, and you can expect to receive it within x days”.

As well as selling things (including subscriptions and pre-orders) you can use Gumroad to crowdsource projects and even to collect charitable donations.

So how did Gumroad come about?

It all started when developer Sahil Lavingia wanted to sell the source code for an app he was retiring but had no online store to do that. He cobbled together a low-quality site and online store, and made no money at all. This abject failure inspired him to devise a simple and immediate way of selling digital products: Gumroad was the result.

How does Gumroad work?

Gumroad cuts out all the frills of a marketplace. The vendor simply creates a product page on Gumroad, which can include a short promotional video as well as a product description. All the vendor then has to do is publicise a link to that page, anywhere they like – on a website, via the social media, through an email newsletter, in a forum sig (if the forum allows it).

For the buyer, it’s even simpler – just click on the link, hit the “I want this!” button, and pay securely using a credit card (Visa, MasterCard, American Express, JCB). They’re then given a link which they can use to download the file they’ve bought. The link is valid for one use only, to protect against unscrupulous buyers distributing the link for their own gain.

What do Gumroad charge?

We believe in honest pricing. We take 5% + 25¢ per transaction. We don’t charge any additional monthly, hosting, or setup fees. Everything is covered: including file hosting, file downloads, payment processing, payout deposits, customer support, analytics. We even cover dispute fees, which are regularly $15 and above with other payment services.

Actually, this isn’t quite the whole story – if you sell your product as a “Pay what you want” item (as Coldplay have been known to do from time to time), Gumroad don’t charge for the transaction at all if the “buyer” chooses not to pay anything.

You can get more information from the Gumroad website.

*I’d advise some caution before swallowing his words wholesale, as Barry’s what’s known in the industry as an MMOer or IMer (in the narrower sense of those words meaning “makes money online by teaching people how to make money online”). With people in that line of work it’s always wise to question their motives for recommending anything. Do they have a business relationship with the seller or are they being paid for their positive review? Sometimes it can be quite hard to tell, but you should always be alert to such a possibility. (I co-authored a book which warns about dangers inherent in the MMO world. It’s called Snake Oil! How “make money online” scams work … and how to avoid them.)

Are there any pitfalls?

If you’re still looking around and deciding whether or not to go with Gumroad, there’s an excellent article on the Smashing Magazine website comparing various e-commerce service providers, including Gumroad. The article was published a couple of years ago, and the first provider included in their comparison, Quixly, closed for business in November 2013. Even so, it gives you a good idea of what to look out for until someone finds the time to update the tabulations.

As you’ll see, if you’re selling low-value items, that 25¢ flat fee per transaction can eat into your profits, though at least it’s come down since the article was published. So it’s worth doing a bit of price comparison based on what you’re planning to sell and in what sorts of numbers.

Nevertheless, it sounds as if Gumroad could be a quick and easy way of selling high-value items, especially if they’re large digital files.

Gumroad all seems fair enough and it looks pretty good. But I haven’t yet used them myself, nor am I aware of anyone I know who’s used them – and I’m always a bit wary of believing a product that appears to have benefited from a slick PR campaign. (A lot of the reviews and interviews I’ve seen online read like press releases.)

I’ve asked my online pals for any information they have, and will post any updates. In the meantime, if you are using or have used Gumroad, please share your experiences by commenting below.