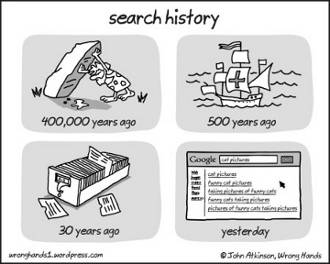 As anyone trying to promote an online business knows, you need to build traffic. And the first thing most people think about for getting traffic is Google. If you can rank high in Google, it will bring you loads of free traffic. Right? Erm, well it’s sorta right in theory but it doesn’t make so much sense in practice. Let’s have a look at some myths.

For starters, it ain’t free traffic! Either you have to spend a lot of time to achieve high rankings (and time is money), or you have to pay someone else to do it for you. Describing organic traffic as free traffic must be one of the biggest myths which persists on the Internet today.

It worked ten years ago. Everything was easier in the ‘good old days’ back in the late 1990s and early in the 2000s. Times have changed. I don’t know why so few people have faced up to that fact. Every single day, I come across forum posts, blog posts, and courses to teach people how to make money on the Internet. The vast majority of them revolve around Google. I don’t know why. I guess it’s easier just to keep spouting the same old theories.

Yes, Google is still the king of search engines, and yes, it can drive a lot of traffic to a site. But it’s not so simple as it might seem at first.

Myth 2 – You can Panda-proof your sites

Lots of offerings from the MMO ‘gurus’ revolved around the usual recipe, which included ranking high in Google. When Panda, Penguin and various other algo updates nuked many sites which had been built in accordance with these recipes, one might reasonably think that the recipes or blueprints were now obsolete.

It didn’t exactly work out like that. It just gave the ‘gurus’ an opportunity to market more ‘new’ products, each of them proudly proclaiming to be Panda-proof or some other such rubbish. In practice, most of them did no more than add a mention of the algo update to their existing product literature. And that was all!

For my money, the only way to Panda-proof your site (and protect it from the effects of further algo updates) is to cut back on your reliance on Google. But I’ve yet to see any MMO ‘guru’ acknowledge that.

Myth 3 – The Internet is a level playing field for all

Back in the day, it used to be. Any small guy could compete against anyone, even the behemoths, and hope to win top ranking and lots of organic traffic. Today’s outlook is more dismal for the small guy. Most niches are dominated by the big players. It’s well nigh impossible to get a top ranking now unless you spend a heck of a lot to get it. Also, I guess you’ve already noticed how Google’s search results favour the companies it owns and the ones who are big spenders who add to their profits.

Myth 4 – Building an authority site is the way to go

Well, it might be. But it can take quite a lot of time and money to build up such content. What chance does a small online retailer have? Even if they can do it, there’s no guarantee that they’ll rank high in Google and benefit from the ‘free’ traffic that brings. Besides, who’s to say that Google won’t change its algo again?

I’m sure there are plenty more reasons not to become fixated on Google, but that’s just a few to start with.