Someone mentioned long-tail keyword strategy to me recently and I expressed scepticism as to whether it still worked these days. Quite reasonably, he asked me why I had that opinion, and “Er, just because that’s what I think” didn’t seem like a good enough answer. I had to justify my views somehow. Thus I spent the next few days reading everything up-to-date I could get my hands on about the subject, plus asking a lot of questions on various forums. Some of the discussions are behind paywalls so I can’t link to all my sources. Let’s see how I got on in my quest to discover if targeting the long tail is a good strategy or not in 2013. By the way, this is not an article for beginners because I’m not going back to the basics of explaining what it is and how to do it. (I might do that later in another article.)

Why did I have the opinion that targeting long-tail keywords doesn’t work now?

The objective is to increase traffic which converts. But much of the exercise seems to revolve around ranking well in Google, and I’m not a fan of doing that for various reasons. You can’t rely on this traffic. Google could change its algorithm overnight and blast your site(s) into oblivion. As I once wrote elsewhere, “They don’t just move the goalposts. They dump the goalposts in a skip outside the stadium.” It’s kinda hard to keep scoring when you’re up against an international behemoth in a game with such rules. There are plenty of other ways to get traffic to your sites, some of which have reasonably predictable results and known costs of acquisition. But I’m not going into all that in this article.

Also, targeting long-tail keywords is an old strategy. Almost every recipe or blueprint I’ve seen for building traffic (and I’ve seen a few – remember this blog started life as a blog about traffic building) recommends targeting the long tail. This is where we should have a picture of a squirrel, just like they all do. But I thought it might be more appropriate to depict an elephant in the room, because some people simply want to ignore this issue, especially if they’re still selling the same old ‘secrets’ to lead you up the (garden) path to promised Internet riches. 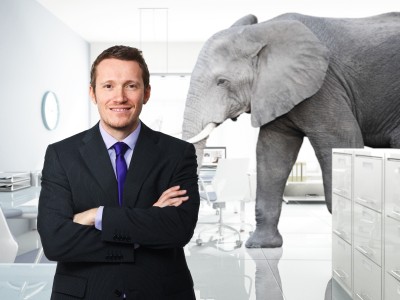 You probably all know the same old recipe – do keyword research, choose your niche, buy an EMD, write your content to a specific formula, outsource content writing or use an article spinning tool, rank high in Google, rake the money in. It used to be quite easy to gain a high ranking in Google by gaming their algo with various strategies such as these, but they don’t work any more.

Things ain’t what they used to be

Anyone active online, and especially anyone running a website, who hasn’t already heard of Panda and Penguin must have been on a different planet for the last couple of years, although I must admit I did recently find someone on a forum who asked me what they were when I mentioned those monochrome marauders. Now, of course, most of these traffic building courses have been ‘updated’ and are often described as being Panda-proofed or similar. It’s true, they’ve been ‘updated’ to include mentions of the dreaded Panda but it’s usually just the same old stuff. Panda and Penguin aren’t the only algo updates either. They’re just the most notorious ones. It’s estimated that Google is currently updating its algo about 500 times a year. Why waste your time and money investing in something such as ranking well in Google when it’s so unreliable and unpredictable? 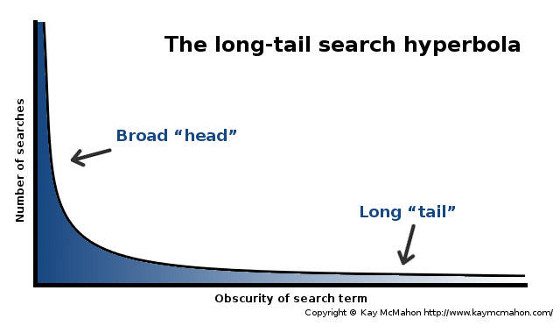 Yet targeting the long tail is still frequently recommended. For most people, it’s too difficult or expensive to target generic keywords these days and anyway it’s often a case of winner takes most. So, on the broad head you can bring in some good search traffic with your generics, but if you’re not rich and powerful enough, you can forget the generics because you won’t get a look in. The exception to this is if you have an old and well established site – an authority site, in other words. Even if you have such a thing (which I do), I would put money on it that it didn’t get there because the owner spent their time targeting long-tail keywords.

Sure, if you look at your site’s stats, you’ll see that visitors are coming in from Google via obscure search terms. It’s a bonus. As for spending time trying to make it happen, it just doesn’t seem like a good idea to me when there so many other more useful things you could be doing. While we’re talking about the long-tail graph, it’s probably worth pointing out that contrary to what some people think, “long-tail” does not necessary mean keyword phrases with three or four (or more) keywords. It means “obscure” keywords, ie those at the long tail of the graph which have a lower volume of searches but taken together can amount to a significant proportion of a site’s search traffic. That said, as with many other phrases which are bandied about on the Internet, people often have their own interpretations as to their meaning.

Some sources say that approximately 70% of your organic search traffic will come from those longer-tail keyword phrases which aren’t so hotly contested. I can see the point of it, but it raises quite a few questions for me, such as why concentrate your efforts on organic search terms? Because it’s free? Well, it’s not actually free, is it? Not if you have to spend your time doing it (unless you don’t place any value on your time). You could outsource the job, but then you have to pay someone to do it and spend your time managing them. Even assuming that you do want to put some effort into ranking well on search engines, you still have to consider which are the best for the specific purpose. For example, there’s evidence to suggest that Amazon has overtaken Google in terms of consumer research.

Is Google the best place to try rank well when you’re selling products?

Don’t assume Google is the best, especially if you want to reach potential buyers doing consumer research. Note the word “buyers”. These are the people you want to attract rather than the drive-by information seekers. If people are looking for consumer information, they’ll most likely use (this is taken from a straw poll I did) Amazon, Facebook, and sometimes even Twitter. For specific product reviews, they also use sites such as cnet. Google usually isn’t their first port of call for consumer information, nor indeed was Bing. My results were biased because of the audience I asked – mostly savvy webmasters. Even so, before launching into any big long-tail campaign it might be worth checking where your target audience does its searching for things first.

I’ve not yet had the opportunity to do much research about keyword targeting on Amazon. However, when I first started to publish books in Amazon’s Kindle Store (not long ago), it seemed to be relatively easy to rank for generics and there didn’t seem to be much point in going for the long tail. Perhaps it’s different if you’re selling products – but selling products on Amazon is a story for another day. We’re looking specifically at targeting long-tail keywords here.

Some people said they wouldn’t use Google when looking to buy something because the search results mostly consist of paid listings and spam. Other people also said that they were using Google less and less these days because of irrelevant results. Also, even if people do go to Google for their initial search, it’s quite likely that having found the information they seek, they’ll next look for where they can get the best deal. So even if you can get your site to rise up in Google’s SERPs – whether by targeting long-tail keywords or otherwise – you are still faced with the next question.

There is some discussion which suggests that long-tail traffic is not only useless, it could be damaging. If the traffic doesn’t convert and your bounce rate increases, the Google algo will attribute less value to your sites. Therefore your rank in the SERP will drop. In other words, the more you succeed in targeting the long tail, the more you’re doing to lower your rank (unless you really are converting that traffic).

This is all hypothetical, of course, and Matt Cutts has said that bounce rate is not taken into account as a variable in Google’s algo calculations. Yeah, right. We know how good Google are at sharing information about how their algo works. Some people thought that it was not the percentage of bounces but instead it’s the speed of those bounces which influences the algo. On the subject of site speed, it all became very technical and convoluted and even some pretty smart techies said they didn’t understand what was going on. What chance do we mere mortals have? Matt Cutts has said that Google don’t use your Google Analytics stats to influence how they rate your sites. Hmm, Matt Cutts, the messenger of mystery and misinformation. But he’s all we’ve got – anything else is just speculation.

Many agreed that long-tail traffic is not good for conversions unless it’s long-tail specifically for brands, product names and serial numbers. But even then, some agreed that if you’re going down that route with specific products, then it’s very hard to beat the major retailers at their own game.

However, some people thought that whilst targeting the long tail was a waste of time for organic search, it worked quite well for PPC campaigns because it filtered out the lookers and left you with the buyers. But no one appeared to have done any research to test this theory so there was no real evidence of this, however small. Even so, it’s interesting that they’d not found it worth doing long-tail keyword research even though they were running e-commerce sites. So, should you make an effort to target the long tail? Some people argue that targeting keywords at all is a waste of time, never mind drilling down to target specific categories of keywords. It depends on where your traffic is coming from, and to some extent where you want it to come from. Do you want to rely on organic search traffic?

The Zen of the long tail

There was general consensus that targeting long-tail keywords is often a tactic used by those who don’t have authority sites. If your content is right, particularly on e-commerce sites, it should be happening naturally anyway. As Google has said all along, create your site for your visitor or customer, not for the search engine. Get the content right and the SERPs will reward you. This idealistic approach sounds great in theory – until you remember that Google search results are stuffed full of paid listings, and links to whatever makes them the most money. Can the cynical old sods (like me) be blamed for just getting on with the job and ignoring them? Funnily enough, I do well enough in Google’s SERPs for my main sites, without trying. That’s why I call it the Zen of SEO – you can be rewarded more for trying less. I won’t be targeting any long-tail keywords any time soon.

Please note that the above is just an opinion piece based on observations and discussions with people who earn a living by running websites. It’s intended to provide food for thought and does not purport to be advice. Feel free to comment!